Saskia Neuman, CFHILL, April 20, 2022
Open a larger version of the following image in a popup:
Courtesy of CFHILL
Share 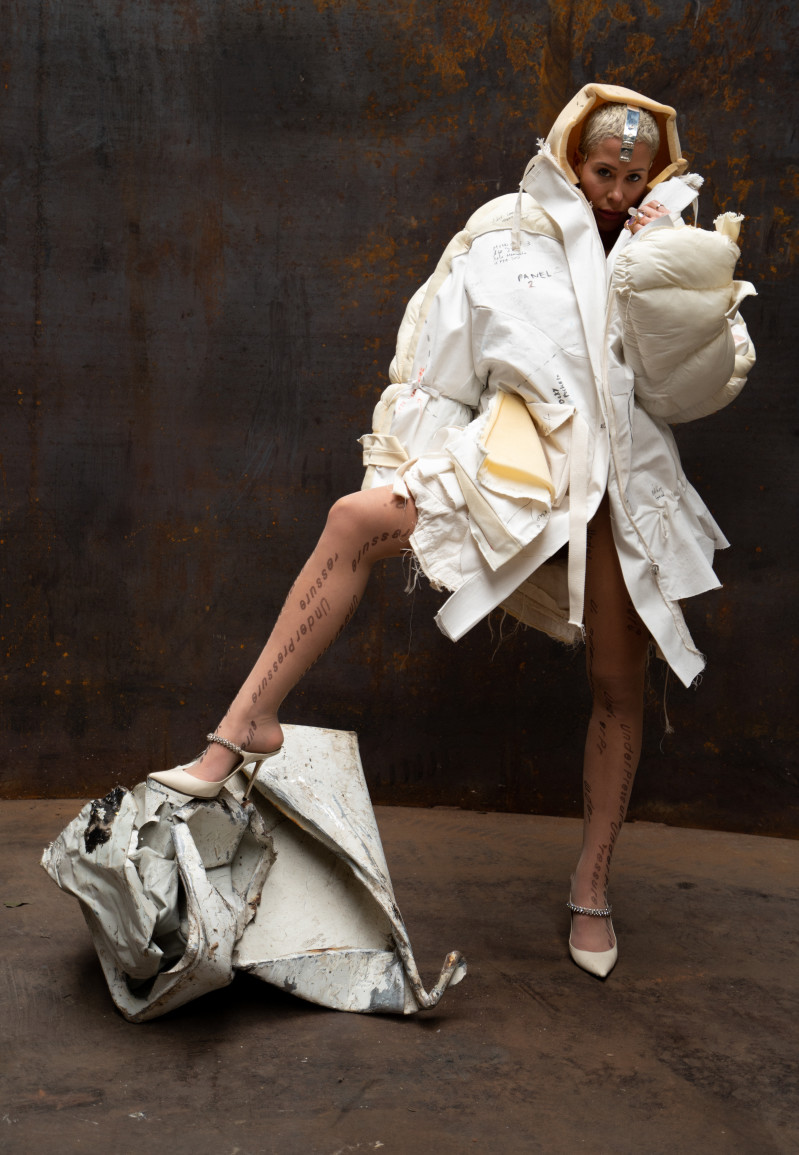 Her sculptures are amalgamations of metal and rubber intertwined, the two materials challenge one another, often poetically installed on the walls or hanging from the ceiling. Yanko deploys these materials in ways that expand the limitations of perception, underlining the opportunities we miss when attempting to ‘just look’. Kennedy’s approach reflects an abstract expressionist-surrealist stance that centers the obvious and less obvious factors that effect and temper the human condition. Although the Kennedy’s influences include seminal American artists such as Lynda Benglis and John Chamberlain.

As if the flow and poetry from a Benglis work has been met head on with the bombastic physicality of a Chamberlain.

Her configurations and the weightless perception are a counterpoint to the materials her work is constructed from. There is a myriad of other artistic influences embedded in her practice as well. With accidental roots in performance, ‘I sort of fell into it’, the artist’s ability to imbue a certain theatricality in her work is evident. Kennedy’s capacity to connect to the substantiality of the material she employs in her sculptural paintings is extremely evident throughout the work.

‘I started pouring in 2009’, she explains, ‘I saw how paint moves, and saw so many possibilities. I immediately wanted to take paint off the canvas.’ She creates ‘second skins’, pouring customized latex paint, which dries, becoming malleable, shapable. These fluid abstract paintings allow the artist to mold her paintings into sculpture, penetrating the bridge between the two materials. I imagine there is a certain amount of theatricality in the process, a small performance of its own… ‘Yes, absolutely’, she tells me.

Kennedy enthusiastically explains paint skins from a less scientific standpoint, explaining how this unique material informs her practice. ‘When I started making paint skins something clicked. I had a new material that had a structural element to it, and it took me the next eight years to understand what I could do with the paint skins.’ Later Kennedy started incorporating scrap metal into her practice, ‘everything happened at that moment, I found the perfect dialogue of materiality. I make a couple of different kinds of paint skins, a soft skin, which is paint by itself, has a porous, visceral quality to it. It has an acrylic base, so over time all the air comes out of it, it slumps, and adheres to the metal, making this beautiful lock and moment, emulating harmony, and inception’.

Sometimes the skins are overlooked. ‘People think they’re leather or fabric, and to me it’s frustrating, because they are so central to my practice’…. ‘People like to talk about the metal work’. I deduce that there’s a fascination with a young woman working with metal, which completely goes against the antiquated idea of the male artist – sculpture, older, forceful, white, and male, think Anthony Caro, or John Chamberlain. ‘Yeah, they [people] love it. The metalwork… It’s sexy, it’s wow…’, she tells me, laughingly. ‘I understand it. I’m often asking a lot of my viewers.’ Kennedy is incredibly refreshing, with a possessing palpable self-distance, ‘I just think people have short attention spans, they want to click on things, and be wowed by what they see, I’m the same at times.’ The artist Nancy Rubens, and her phenomenal sculptures created from scrap metal, such as discarded airplane parts, is just such an artist that comes to mind when I look at Kennedy Yanko’s work, where, as Kennedy states, one underestimates the enormous stature of the art when talking about a woman artist. Large powerful metal sculpture has that affect, but it’s the artist’s robust, although delicate paint skins that define her work, taking the viewer into a new realm of artmaking.

We move on, talking about what we look at on Instagram, ‘lots of cats, and what my friends are doing’, Kennedy shares, ‘but I’m trying not to be on social media so much, it can become very distracting.’ From there we meander into film, ‘I used to watch so much more Film Noir, Francois Truffaut, essentially anything from the Criterion Collection… but right now, when I’m giving something real attention it has to do with my work, in the studio, otherwise it's respite, from inspiration.’ She recently started reading essays by theologian and Estonian philosopher and historian Linnart Mäll, and spoke at a symposium focusing on sustainability, drawing from the saint, writer, composer, and philosopher Hildegard von Bingen. ‘I’m fascinated by her, she had amazing ideas on photosynthesis and spirituality. The symposium brought in people from the UN, as well as the science, architecture, and art communities.’ Hildegard von Bingen neatly ties into Hilma af Klint, who was a great admirer of the saint. ‘When I decided to do the exhibition at CFHILL, and include Hilma af Klint’s work, to take on such a task and responsibility I had to view it as a sisterhood of sorts, rather than just me being an observer of her practice.’ Kennedy admiringly tells me, ‘After she [Hilma af Klint] met Rudolf Steiner, who told her to look into herself, and stop all the woowoo stuff, she did, and made even better, more insightful work. That is what I want to explore’. There is a great deal of kinship between the two artists. ‘For me, to be able to relate to people, to open up dialogue, has to come from a place of reciprocity’, Kennedy shares. I imagine Hilma was similar in her approach to sharing not only her work, but also her person. Kennedy’s starting point is often from a place further afar than many artists, ‘Yes, my work is conceptual, but I’m doing this, making art, as a process-based artist. Making things, relating to materials is incredibly important to me.’

‘I would love to read Hilma’s journals. I would love to use her voice, her experience. I mean that’s what I’m trying to do in my practice. I’m using my experience, speaking biographically, using my very particular experience within the lens of art history. We often hear other artists voices, through somebody else’s writing, their observation.’ Kennedy explains, ‘I want to talk about consciousness and inception.’

The immediacy that Kennedy employs as she dives into Hilma’s work and how the artist responds to it is fascinating. She tells me about how all these aspects of life she wants to talk about, ‘the history of the world, and how we relate to that. People want to bring to a conversation about gender, race, and equality.’ Kennedy divulges that perhaps that is where we, society, choose to maintain a conversation at a certain frequency. ‘Of course, all those things are baked in any conversation. There are a lot of dots I’m looking to connect, and as my language and milieu develops hopefully the subject will, as well. I still feel that spiritualism in art is kind of just starting again, since Hilma af Klint’s recent exhibition tour. This show ignited an opportunity for us to reopen this conversation by adding an immense amount of information on quantum physics, science, and language when we talk about the occult.’

Using her artistic prowess and years of schooling, Hilma af Klint’s practice progressed as the artist embarked on a life-long journey depicting her inner world, decorated with spirituality and esoteric images. Despite the difference in visual expression the further parallels between Kennedy Yanko and Hilma af Klint are revealed. Their use of materials has a definite reflection upon the times each woman lived/lives in, and the impression they are willing to offer to their audience. The delving into a sensibility of spirituality and having it manifest itself as a concrete vision that can be shared and interpreted in a variety of ways, appears to be the ultimate intention of the two groundbreaking artists.