‘My Whole Body Is Moving With It’: Artist Kennedy Yanko on the Performative Nature of Making Sculpture

The painter and sculptor is the Rubell Museum of Art's 2021 artist in residence.

Kennedy Yanko paints and sculpts to a kind of choreography. The Brooklyn-based rising star is known for her evocative and sensual sculptures made from paint skins (essentially, sheaths of latex paint) and manipulated pieces of scrap metal she has hunted down at junkyards across New York City.

Performance is a key element of her work, and Yanko, it’s worth noting, spent three years at the Living Theatre, New York’s oldest experimental theater group, followed by time as a yoga instructor and a bodybuilder while she pursued her artistic practice. All of which is to say that she is highly attuned to the presence of the body and her finished works, which are best described as a product of improvisation, timing, grace, and physical strength.

To begin making her works, Yanko, in a gesture akin to the Action painters, pours out industrial paint onto a covered ground to create her skins. Timing is of the essence: The paint skins must be cohesive but still malleable when Yanko affixes them to the metal armatures she has welded, torched, and bent. It is a process that involves her whole body as she twists and shapes the skins into a kind of duet with the materials. The resulting sculptures, though abstract, possess decidedly anthropomorphic qualities. At times, they seem paused in motion, breathing; their industrially made shapes appear startlingly soft, like a dancer’s fluttering costume (the movements of Modernist dancers like Loie Fuller and Mary Wigman come to mind).

At times these sculptures are oblique portraits. In a recent exhibition, “Salient Queens” at Vielmetter Los Angeles, Yanko named each sculpture after an influential woman in her life. Meanwhile, in “Post-Capitalist Desire” at New York’s Tilton Gallery, the works engaged socio-historical critiques.

Recently, Yanko was named the 2021 artist-in-residence at Miami’s Rubell Museum of Art. It is the first time the honor has been given to a sculptor (Amoako Boafo, Sterling Ruby, Allison Zuckerman, and Oscar Murillo are all former awardees.) She is currently working in the Rubells’ 36,000-square-foot space, where she has been equipped with a forklift, cargo van, scissor lift, and more. (The work she is making there will be shown at Art Basel later this year). She’s also launching an NFT with the acclaimed musician Masego.

With plenty on the horizon, Yanko spoke with Artnet News about scaling up her work, why she thinks NFTs are good for the art world, and what she’s working on now.

Let’s start with the news of your residency with the Rubell Museum of Art, which has brought you to Miami. What has it been like so far?

It feels very lucky. It’s been wonderful to have space to work at this scale and to have the support to do it. I have a forklift! I’ve felt comfortable being myself and I’ve been gaining a lot of confidence spending time talking with the Rubells about my work and my personal life. Chewing through things with the Rubells, who have been so integrated into the art world and with so many different kinds of artists, has made me more comfortable in how I engage with my work and share myself around my work, too. There are a lot of ideas about what an artist should be like and sometimes we can feel plagued by ideas of how we’re supposed to show up in space. My time here has helped alleviate some of that.

I met the Rubells after they purchased a piece from my show in Milan. After that, we did a studio visit, and it all kind of clicked. They responded to my work. I think they saw that I have so much fire inside of me and so many ambitious projects that I want to take on. I want to challenge myself here. Part of that process has been scaling up my paint skins.

Yanko at work in the studio, 2021. Photograph by Mike Vitelli.

A lot of artists describe their work as being at the intersection of sculpture and painting, but you are actually making sculptures with paint.

Privately, I call my works paintings. Painting is always very much in my mind even when I’m making installations and working with metal. In this residency, I’ve been working on a series of paint skins that involve over a hundred gallons of paint. The skins have become an incredible organism now because I can hide all the mechanics of what’s happening and build them up or stand them down. Working with the skins in this sculptural way has really changed so much. It’s still just paint, which boggles my mind. I’m just like, how come nobody else is doing this? It’s such an incredible material. Right now I’m also working on an outdoor large-scale work in which the skins can be translated into resin or marble with the same gesture and movement, just with a different form of material.

Has your process with the skins changed working at this larger scale?

To make the paint skins, I pour our large bodies of paint with a couple of additives for UV support. To me, I feel like I’m just moving through it and dancing and expanding. Up until now, I’ve always felt that it’s has been a simple process but I want to start talking about it since I realize many people don’t really know the materials I’m using, thinking these are made with fabric or leather.

Your description of making pours sometimes sounds like you’re entranced in a choreography.

It’s very performative. My whole body is moving with it. It’s cathartic, mesmerizing. My painting practice has shifted over the years. I come from an aggressive action painting history and my work has become a lot more edited and decision oriented, and time based. While it’s not the same as where I started, I’m still getting to have those same gestures and that same kind of intimate experience with the material. And to actually apply the skins to metal is very choreographed—I’m almost wrestling in a way and tucking them into place. In this residency, some of the skins are 30 feet long; my body was encompassed in them while working. We’re going from underneath them and flipping them over and when we’re working it’s like being in a cave and dancing back and forth. I’m also responding to how the paint skin bends and responds to the metal and its shape. The skins are a kind of latex, so it has a porous quality that holds air and, once it’s in place, it deflates and hardens and you can literally knock on it. It kind of glues to itself in a way and locks in place. There’s a synchronicity and reciprocity that happens together—even as I place it, the work becomes an entity all its own.

How did you first come up with the idea for the paint skins?

In 2009, I did a show called “Wu-Wei.” I was working with pouring paint on the canvas. For the first piece I made for that show, I’d poured a couple of colors and was moving my brush through the paint and it gets these really cool fractal details. I was working in my parents’ garage and I left the piece on the floor overnight. The garage is a little slanted and the paint had moved a little bit, poured off the side, and the whole piece changed overnight. I came downstairs and literally fell to my knees, like “Oh my God, this is so beautiful.” That was the beginning of me seeing this Daoist perspective on materiality. I can respond to it and that it’s going to have a mind of its own. I started thinking about how to get the paint off the canvas from there. 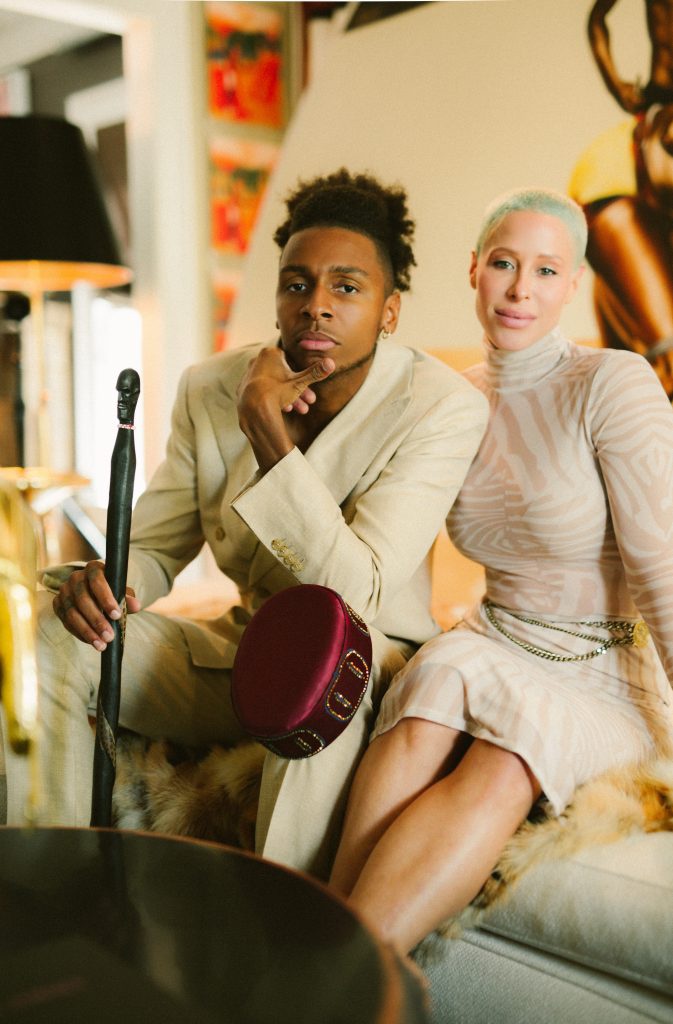 Yanko and musician Masego, who collaborated on an NFT.

The NFT you made is called Purity. It’s this kind of alternate universe that spills out from this image of your sculpture of the same name and brings the viewer on a kind of surrealistic journey with music by Masego leading the experience. Can you tell me more about the actual collaboration?

My works are really seeking an amalgamation of all things coming together. Sculptures have a way of pulling you into their universe. This work feels like a continuation of those things. It actually builds off a work I had made in 2015 with the artist Jesus Calderon called Indelible Fluidity. In that work, we created an opportunity to go into one of my paintings as a kind of portal into another world. It was a VR work that didn’t come to fruition for various reasons. Here, we’ve picked up on a lot of those ideas and we’re journeying through my work Purity. After working for 15 years, it’s interesting to see the synchronicities between my interests and the installations and performance. This really feels like an installation to me but on a different scale with digital skills. Working with Masego has been a dream too. He sent me the sounds filled with the darkness of this journey and the abstraction of all these feelings and sensations. I think it’s the beginning of a lot more tech projects for me.

What do you think have been the major misconceptions around NFTs thus far?

The art world has put so much emphasis on the fact that there’s been shitty art coming out around it, but it’s not really about the art. The art-art of this whole thing is the model. It’s a kind of certificate of authenticity and in a way a contract. As an artist, I’ve given every part of my life to make my work and to protect the actual objects in the world—the protocols that tell you exactly how to care for them, how to install them, what to do if something happens with them. It’s a huge part of my practice. I think NFTs are an interesting addition to the conversation of transparency in general. My last show, “Post-Capitalist Desire,” was about how our interests, ethics, etiquette, and social contracts are all really chosen by economic tides and not so much by us. The idea of capitalism is one of an organism that’s changing. I think in all these conversations about decolonization it’s important to have a decentralized form of money, like crypto. And I think if anyone has an issue with artists getting money this way, I would love to have that conversation with someone since artists need to get paid.

This has been a busy year for you already. How are you feeling about the future? What’s next?

I’m just getting started. I feel like I’ve been in the trenches for the last 15 years just making work and doing what I can with whatever money I have. I’ve been building a community of people around me and I have an incredible support system now, a great launchpad. I’m really ready to go. I feel liberated and released and welcomed for the first time.