Anthony Gilbert, SLAM, June 25, 2016
Open a larger version of the following image in a popup:
Share

Basketball can often be described as a true art form. From the way Kyrie Irving dribbles against defenders with ease, to the poetry in motion of a Klay Thompson jump shot, the game can be viewed as a living, breathing masterpiece.

During the Eastern Conference finals, SLAM had an opportunity to interview Esmaa Mohamoud of Toronto, ON.

She has a unique perspective on how the game inspires, yet it also can deal a harsh reality to those who don’t or can’t fulfill their basketball destiny.

Mohamoud gave some insight to her most celebrated piece, which features 60 deflated basketballs…all sculpted from concrete. The visual is breathtaking, and with each piece weighing 30 pounds, it’s a pretty heavy subject matter—both literally and figuratively. 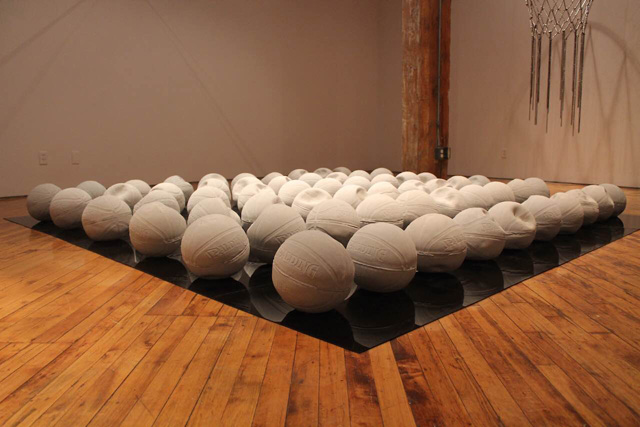 SLAM: How did you get into art and where did this journey begin?

Esmaa Mohamoud: I think starts with me being young and being creative. I would go around making drawings mainly, but I think it really, really started for me when my dad stared to encourage me. He got me art supplies, he saw that I was pretty good at drawing for a kid. He encouraged me, and I would always watch this show called Art Attack, which would come on every single day on a local channel called TVO Kids. It’s a Toronto channel—shout out to Art Attack. That show basically taught kids how to make art and I loved that show. I would watch it every single day and I would make art every day. I knew by the age of 5 that I was going to be an artist.

SLAM: When did you start watching basketball?

EM: I didn’t have a choice because I have four brothers, and I’m the only girl, so I was forced to watch basketball [laughs]. I really started getting into basketball when I would go hangout with my brothers and they would go play basketball, and I would sit there and watch. I’d be on the curb and I wanted to play. I’m not that good and I learned that, and now I just respectfully watch and admire players. A lot of my love came from Allen Iverson, he’s my favorite player, and Vince Carter, and Tracy McGrady, in that order actually.

SLAM: What was it about Iverson that spoke to you?

SLAM: When did you combine the two, and begin doing basketball art?

EM: This is a really difficult question because I would say for the last four years I was making art about humor and racial politics. I’ve always been interested in racial politics. When I started my master’s program, I found it difficult to do humor because it didn’t translate the way I wanted it to. I didn’t want to dance around the issues, I wanted to actually talk about them. The materials I started to use were concrete and metal, and I knew that it was basketball that I wanted to speak to because I was seeing a lot of things that were happening to black men and it really bothered me…but at the same time I felt that I couldn’t say anything, and I couldn’t do anything. But it was art that allows me to talk and to vocalize how I feel. So I looked at basketball courts, and I did my research by studying basketball courts in Toronto, and men playing basketball. For the most part it was through talking to people about their experiences and how bad they wanted to be an NBA player. That really made me want to talk about this subject.

EM: I was thinking about how these guys were telling me about how they felt about wanting to be in the NBA so bad and watching the documentary Hoop Dreams—which broke my heart—but that documentary is what really fueled the Heavy, Heavy (Hoop Dreams) piece. So I brought a bunch of basketballs into my studio and I was looking at them, thinking about them, and I thought, These things are really light, but this issue is so heavy. And that’s literally what it was, so I deflated the balls because that’s how a lot of black men feel…that their dreams are deflated. I used the concrete because it wasn’t enough for them to look heavy, I wanted them to be heavy. If someone lifted it up, it has to be 30 pounds, so in total the installation weighs 1,800 pounds. You can’t lift it up. 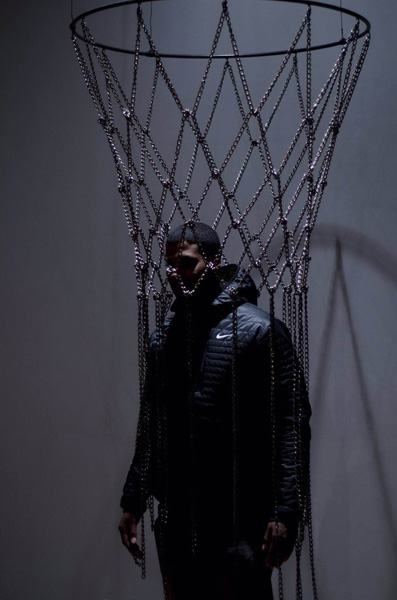 SLAM: What’s the symbolism of the chain net?

EM: The net piece is the one that I made first. I made that in 2015 at the end of the year for a grand opening of a gallery here in Toronto, but I was thinking about using the visual vernacular of basketball to actually talk about institutionalized racism and how a lot of black men feel captivated to only exist or be in the role of basketball or sports. As a way of making it or being successful. I was thinking about captivating the black male body, so at my show, I actually had a black actor perform within that piece, and he disassembles that net and chain and walks outside of it.That speaks to performance art and I wanted it to be a powerful gesture. I wanted to give the black male body agency to do what they want and it not be about just sports. You can be a basketball player, but you can also be other things.

SLAM: What’s next on the horizon?

EM: I definitely want to keep making works within the realm of athletics. I’m working on a few pieces right now under wraps in my studio. I’m not ready to let them out, because I’m still working on them, but I feel like I’m not done with basketball yet, and I want to keep using the visual of basketball to speak to these issues. I have a few ideas about other sports, and sport-related comments that I want to make. So hopefully within the next year, I’ll have another solo show and I’ll release those.