Interview with artist Tomokazu Matsuyama, a Japanese who drew public art on the most famous wall in the United States

Takeshi Sato, GQ Japan, October 20, 2019
Open a larger version of the following image in a popup:
"Daylight In My Place" (2019) by Tomokazu Matsuyama and painting work
Share

Tomokazu Matsuyama, an artist living in New York, painted a mural on the most famous wall in the United States in September. Even if you write this, not many people will come to the point. This is because Tomokazu Matsuyama, an artist who moved to the United States at the age of 25 in 2002, has not been active in Japan. Here are some up-and-coming artists in the contemporary art world that the Japanese (only) do not know. I interviewed him who came to Japan with more than 10 painting works in early October.

There is a wall called "Legacy" near Soho in New York. It is a wall with public art called "Bowery Mural", which is about 26 meters wide and 6 meters high. On September 24th, Japanese artist Tomokazu Matsuyama completed a new mural on this wall. It is said that it was drawn in 14 days from September 11th. The colorful paintings that he specializes in are spread all over the wall.

There is a wall called "Legacy" near Soho in New York. It is a wall with public art called "Bowery Mural", which is about 26 meters wide and 6 meters high. On September 24th, Japanese artist Tomokazu Matsuyama completed a new mural on this wall. It is said that it was drawn in 14 days from September 11th. The colorful paintings that he specializes in are spread all over the wall. 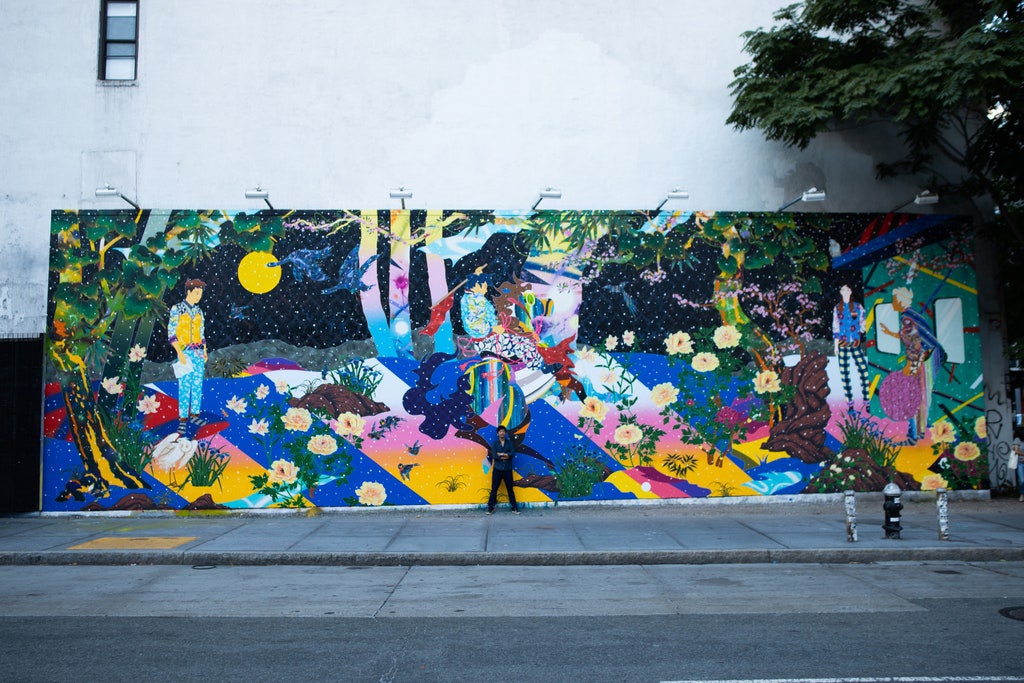 On September 24th, in front of the completed public art at Bowery Mural. 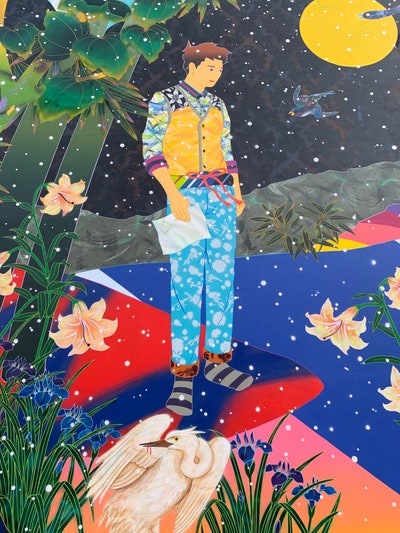 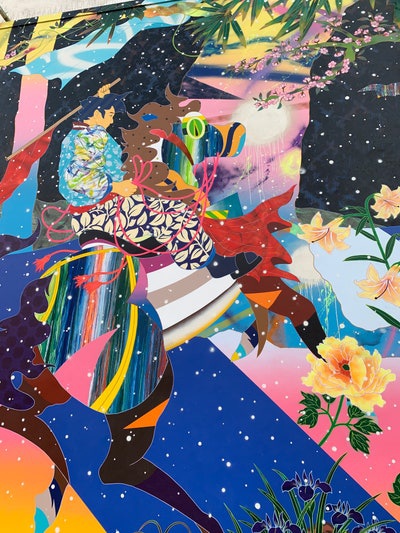 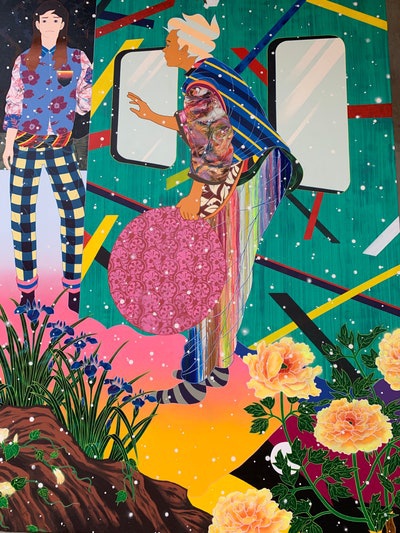 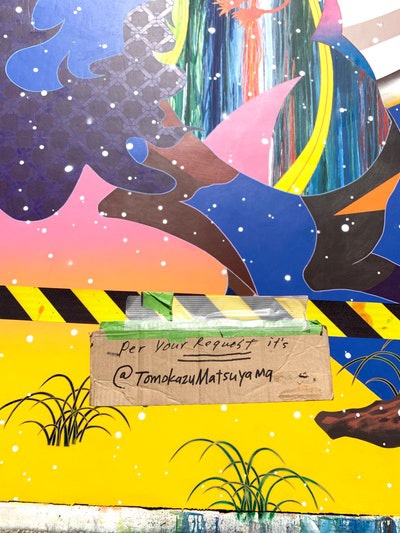 The Bowery Mural, which became famous for being drawn by Keith Haring in 1982, has been presented by more than 20 top-notch artists such as JR and Banksy. Mr. Matsuyama was also on the same shoulder as his face, but what kind of emotions did he get when he received this offer?

"One of the attractions of New York is that it's a city of unrequited love forever. It's been cold for years, and that's why I want to be recognized. The wall painted by Keith Haring in the 1980s is 10 years old. It was revived before. Famous gallerist Jeffrey Deitch was the curator, and a writer was selected along with developer Tony Goldman. I felt like I was able to join one page of New York culture for the first time. That's why I immediately answered "draw". I was happy when I was asked. "

According to Mr. Matsuyama, I think every New York artist has thought, "If I draw on that wall ...". Then, what kind of work did you want to make in order to finish a masterpiece with a width of 26 meters and a height of 6 meters in just 14 days?

"That kind of mural, wall is a macho world. It can be said that it is American, but I have a big feeling that I will bring only a spray can and write it down by myself without sketching. It's like a slugger, a 4th hitter in Major League Baseball. It's not always right to compare it to sports, but it's impossible for Japanese people to do it in the same way. I tried to do something that didn't make a noise, not just a way to compare the power of the macho world. I was confident that I had been active in New York for 17 years, so I raised the threshold. I thought I'd do it. "

So what was the specific expression method that Mr. Matsuyama took?

"It's a demon's guts (laughs). It was really a" guts drawing ". If you do it with a spray can, it will be a highly physical expression, so people who see it will be excited with" War! ". While clearing that, at the same time, in order to make it a work that can be seen even at a short distance of 30 cm, I thoroughly worked on more detailed manual work. I thought that I would make a stadium with craftsmanship. I wanted to take an approach that would work both at a distance and at a distance of 300 meters. I thought that if I could do that, I would get the results I was looking for and at the same time contribute to the culture of New York. " 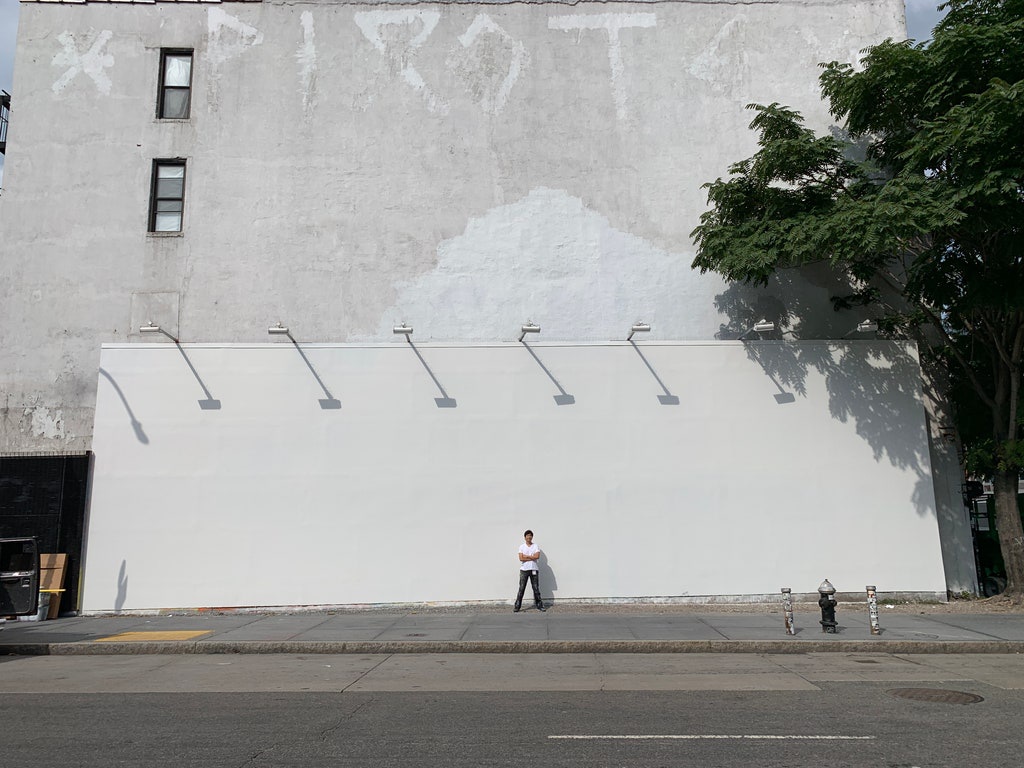 On September 10th, in front of a clean bowery mural. 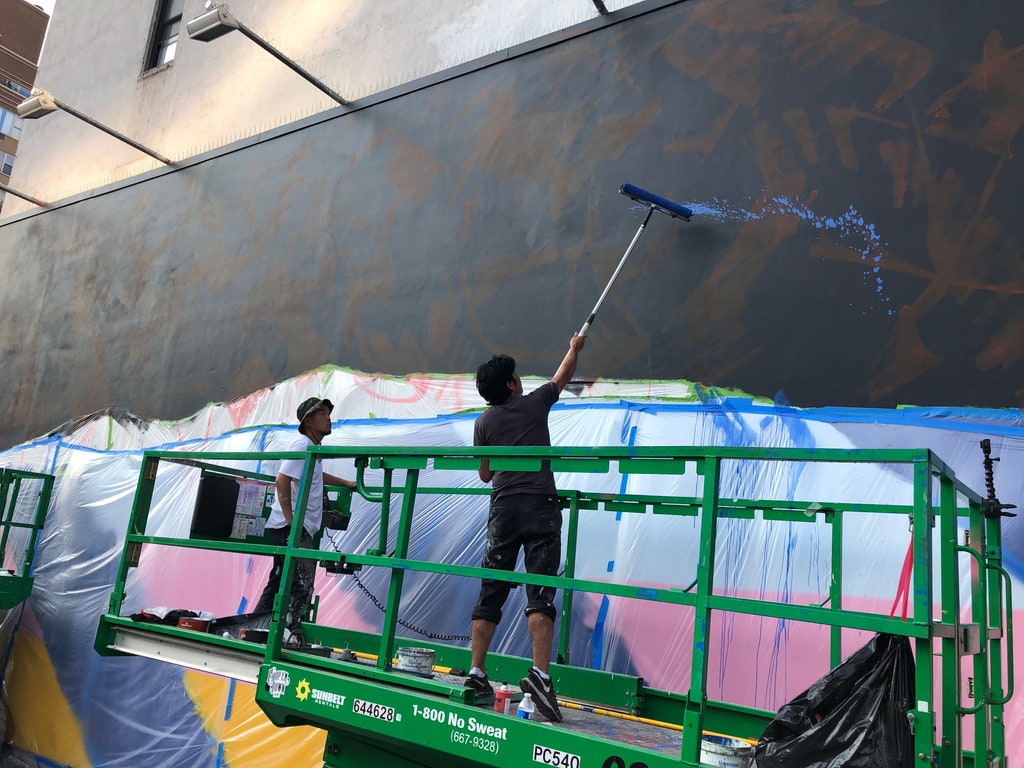 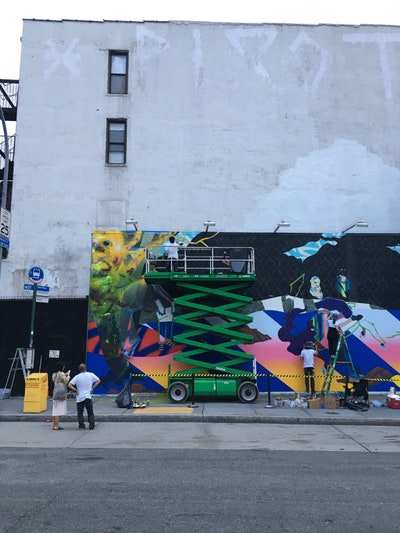 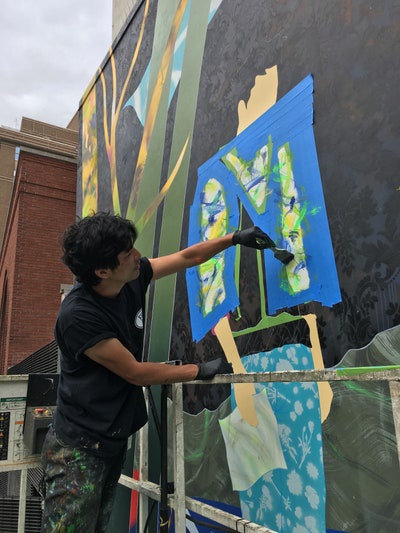 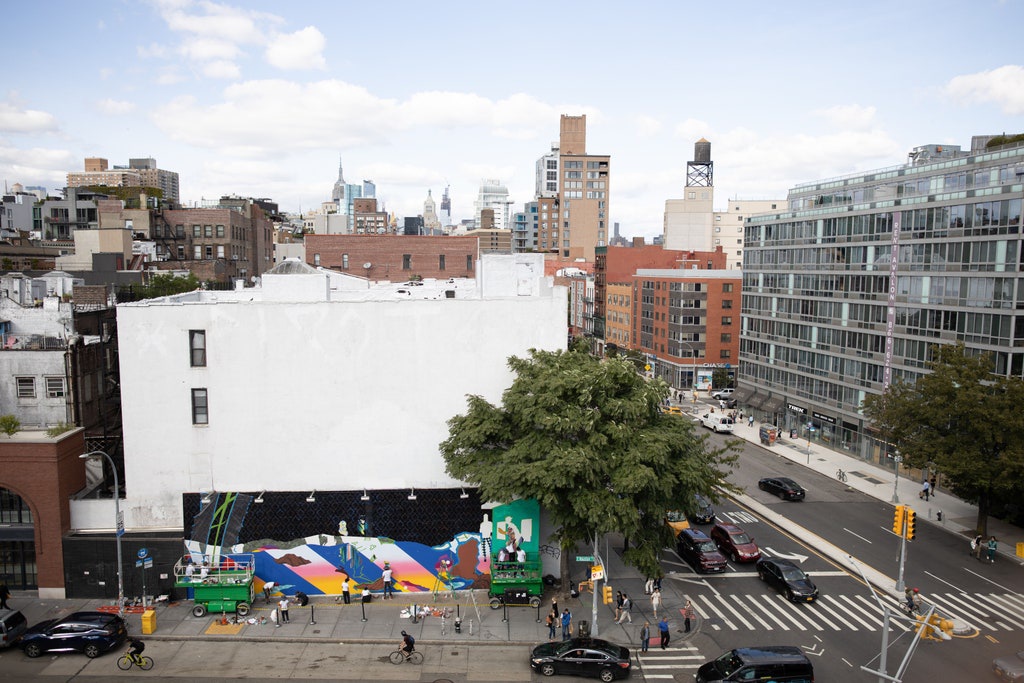 Design is the answer, and art is the question.

So what is the style of the artist Tomokazu Matsuyama? First, Mr. Matsuyama asked about the basic concept of facing art.

"The way of thinking hasn't changed all the time. How can we cut out the present era? I don't think that good art is about giving answers. It is design that gives answers to problems. Art Is to make a question. When you see the work, "Hmm? There was an introduction with the question "", then there was an understanding that "I see", and finally "?" "I think it's ideal to end with" 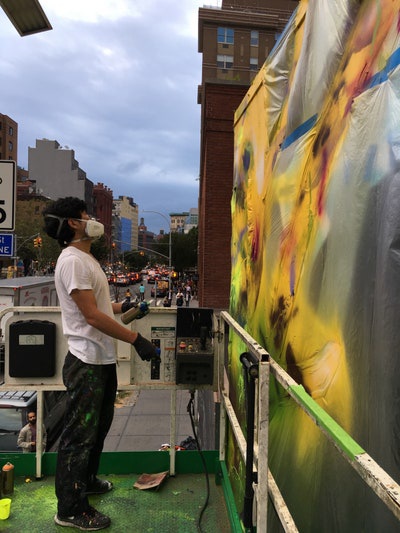 Working on a spray can on September 14th. 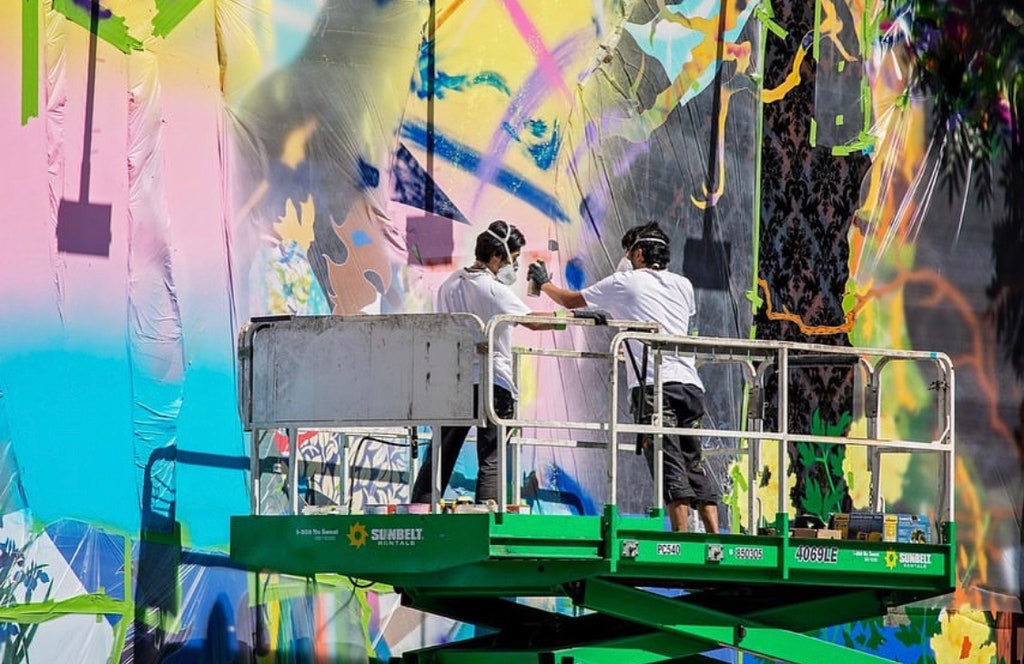 Work is at the turning point on September 17th. 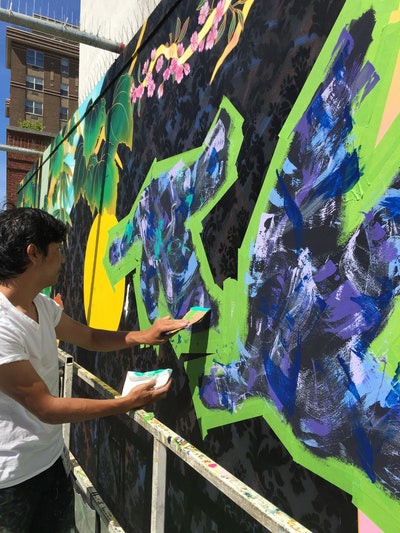 On September 20th, I will paint in every detail. 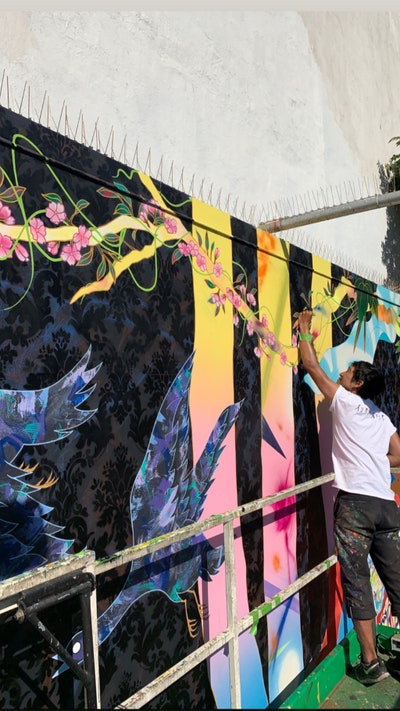 On September 21, the goal came into view. I will drive in. 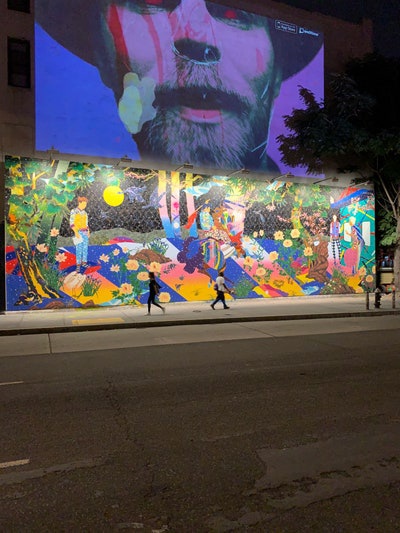 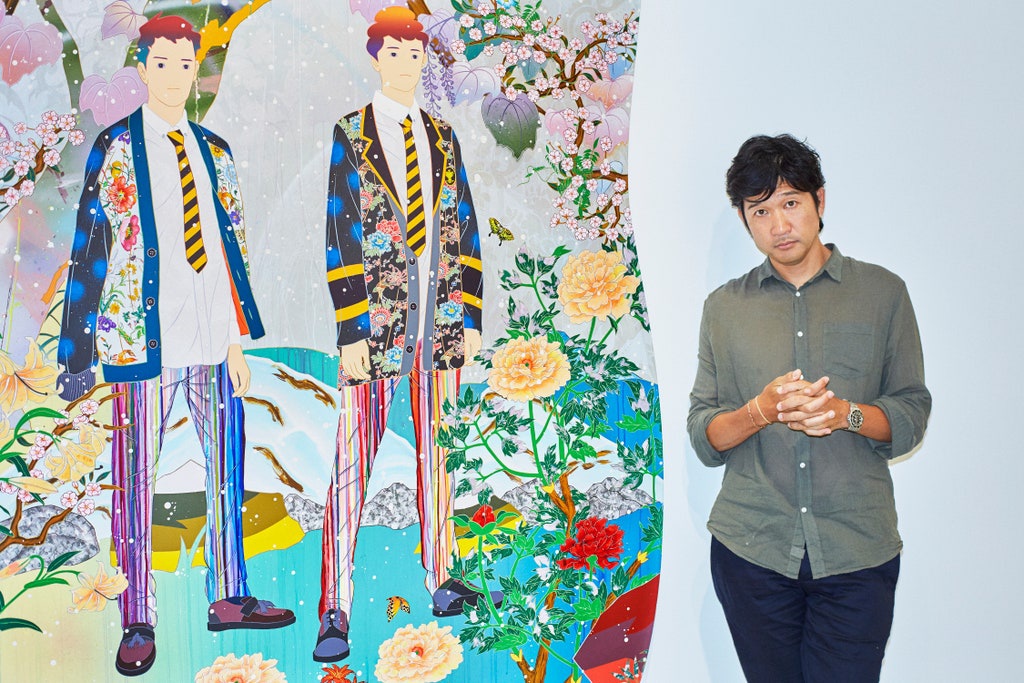 "Put Off Behind The Mask" (2019). The two people depicted are fashion models.

Next, I explained how such a concept was made into a work while looking at a dozen new painting works brought to Japan. Inside the colorfully colored canvas, modern figures such as those appearing in fashion magazines and culture magazines sold at NY newsstands appear, and the space decorated with Western interiors spreads out, while It also contains a lot of traditional oriental motifs.

"What we are trying to do in these works is to organically connect different poles from different places and times, such as the West and the East, the past and the present, the art history and the present culture consumed. By multiplying and reconstructing the things at both poles, we can unify the things with different cultural origins. Information is overflowing on the net, and SNS depicts the current world where even the borders are ambiguous. is. 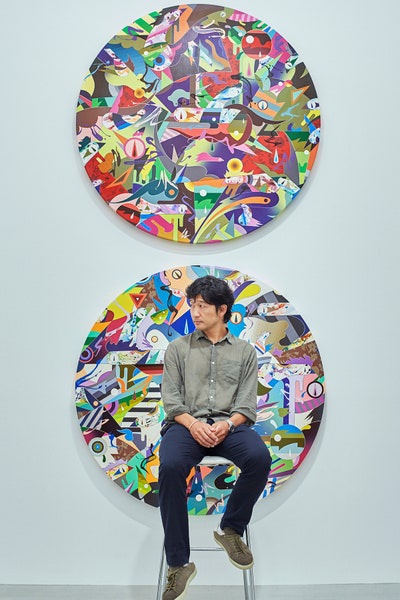 The top is "Close Hand Rules Begin" (2019) and the bottom is "Honey Holds Charm Blessings" (2019). If you look closely, many bird motifs emerge.

What Tomokazu Matsuyama wants to express

It seems that Mr. Matsuyama's background is related to the background of his borderless expression activities, from painting to sculpture to installation, using motifs that transcend time and region.

"I was born in Takayama, Hida, and spent a childhood on the west coast of the United States and was greatly influenced by that culture. When I came back to Japan, I didn't really get used to it. I wondered what I was. I was wondering as a child. "

I imagine that what Mr. Matsuyama calls "the feeling of floating identity" was the driving force for his creation.

"In this era, there is a lot of information such as SNS, and it is not clear what can identify our culture and identity. Even in Japan, it is quite natural that there are foreigners over the cash register at convenience stores. Then, what can we define as "us"? If I can trace the "feeling of floating identity" that I saw and felt when I was little, through diversity I thought I could capture the present. I wish I could express a natural mixture of vague reality, everyday life, and nomadic culture that is free from belonging. " 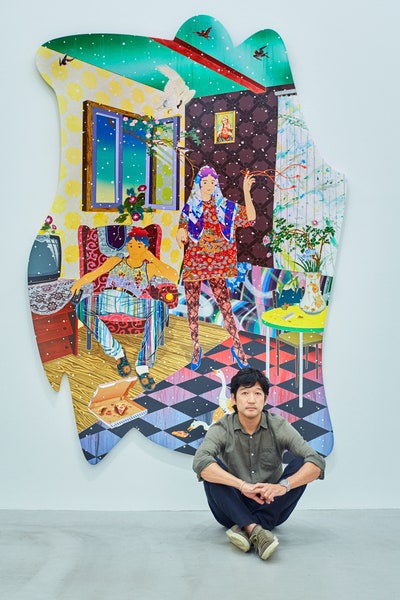 "Wanderlust Innocence" (2019) and Mr. Matsuyama. The size of the canvas is 2 meters and 50 centimeters high and 1 meter and 80 centimeters wide.

In Mr. Matsuyama's story, it was impressive that what he wanted to express was clearly verbalized. I felt that this was a great weapon to win in New York. Now, gender, age, and nationality are no longer significant, and the barrier between "noble" culture and street culture is disappearing. I had the impression that Tomokazu Matsuyama was an extremely contemporary artist who accurately expressed these times.

In 2020, he plans to work on a large-scale public art that symbolizes Tokyo. This man may change Japanese art. 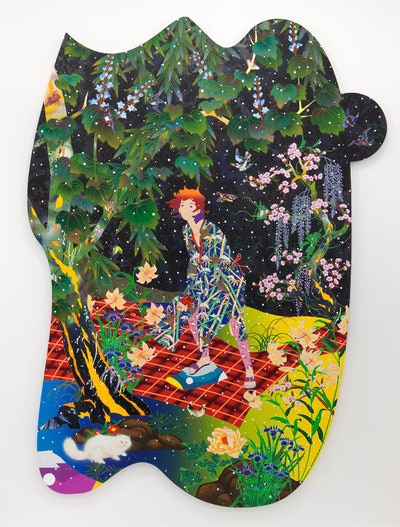 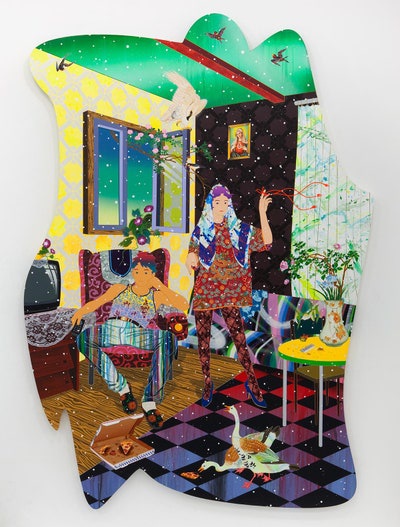 Artist. Born in Gifu prefecture in 1976. After graduating from Sophia University, he moved to the United States in 2002 and entered the NY Pratt Institute, a prestigious art school in the United States. Graduate at the top. He has held solo exhibitions and exhibitions at galleries, museums, university facilities, etc. in Japan, Dubai, Hong Kong, Taipei, Luxembourg, as well as major American cities such as New York, San Francisco, and Los Angeles. He also collaborates with fashion companies. Currently, he has a studio at Greenpoint in Brooklyn and is developing his activities. A special feature will be featured on the MBS-affiliated TV program "Jonetsu Tairiku," which will be broadcast on October 20.