I’ve done this kind of thing before, but from now on it’s a program: once in a while, I’m going to write about one or two pieces of artwork. It’ll be One-or-Two-Pieces-of-Artwork-Appreciation Day. We’ll look carefully at the work and reflect on it. We’re going to start with Aquarius, a large and ambitious new piece by idiosyncratic fantasist Inka Essenhigh. 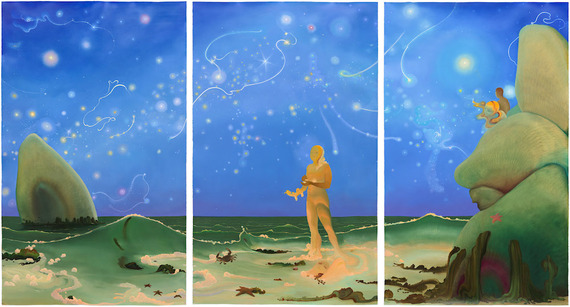 Aquarius could be said to depict a scene, a messy shore beneath a crowded sky. Similarly, it could be said to have a composition, with each panel rising to a peak in a classical compositional triangle, and all three peaks rising and falling in sequence like a wave. These preliminaries of subject and composition are necessary in order to establish any kind of legible and unified picture at all. But they represent a gloss so condensed as to miss everything about the picture. 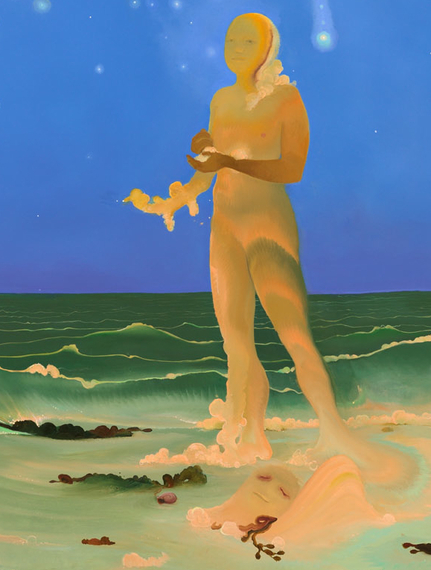 This vaguely female humanoid gazes serenely skyward, eyes half closed. She holds some glowing thing in her left hand, and her right arm ends in a cloudy zoological mass. The same cloudy shapes depend from her right knee and her left foot. Her long hair is similar in structure, and more of it leaks from a flattened, discarded head among the kelp on the shore. She herself must have shed this head. She seems to be in a state of transformation. Glowing fields of yellow and green pulse up her body. Their marbled end-paper patterning suggests that her transformation is not from matter to matter, but from matter to energy. She is leaving behind the material nature of the shore and of animal life, and readying to move upward into the stars.

Our eyes move to the stars as well. What strange stars they are!

This is not the flat dusting of the starry sky as we lazily conceive it, but the three-dimensional clot and void of the latest model of the universe, with its local and distant neighborhoods of stars. This is a sky of neighborhoods, of some stars that go together with one another, and gaps, and then other neighborhoods at other distances. It is a spookily bright sky, a sky of cyan, indigo, and turquoise, and the stars shine brighter in white, yellow, and orange against it. This is a tremendously large sky, inviting us to fall into any of its separate regions.

We can travel between the regions too, our eye guided along by the lighter streaks that swoop across the vast gulfs. Some of them seem to represent the motions of stars. Others are simply lines, a new feature of new heavens. These streaks reek of the calligraphic edge of some of the hallucinogens. They repeat in the unnatural crests of the waves of the low-gravity planet our heroine emerges from. 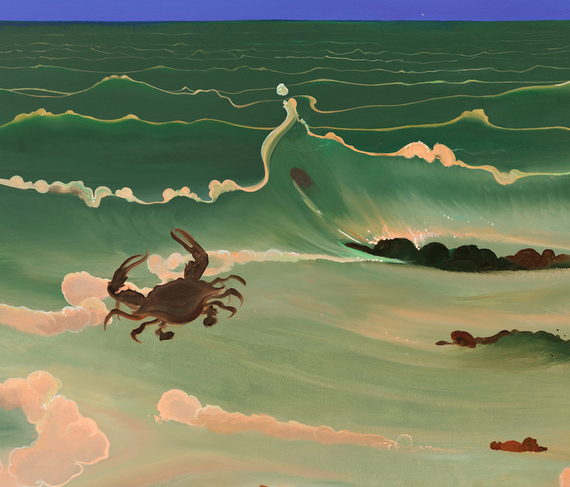 Notice how the lines of these wave-crests, as they approach, take on the cloudy zoological quality of the heroine’s transformed, liquifying flesh. All forms repeat here. All parts of the composition, as separate as they are, can also be seen as repetitions of a very small set of underlying principles. In the top right corner, for example, more humanoid figures have climbed marbled end-paper boulders to commune, in a worshipful kind of way, with some of the more local suns. 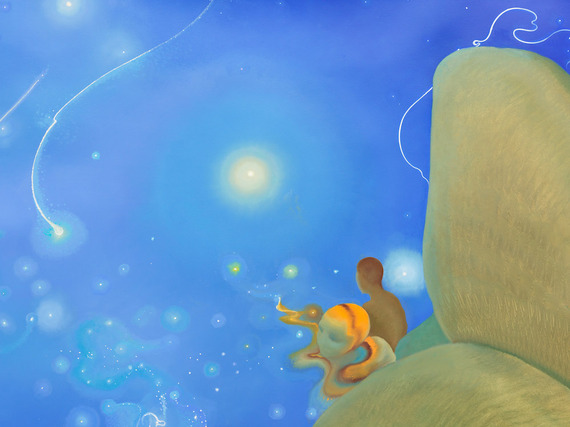 In a lesser way, they repeat the odyssey of the heroine. And in a way lesser still, their own supplication is repeated at the base of the boulders. 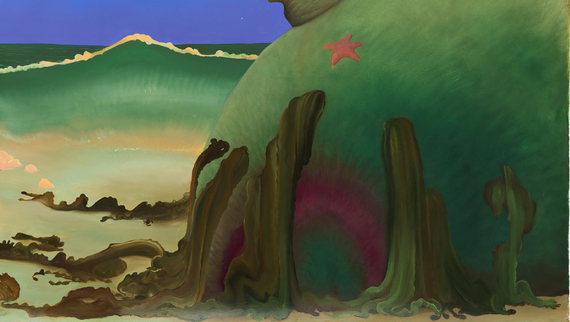 Here the marbled pulsing occurs in dimmer, muddier greens and maroons, and the seaweeds – primitive organisms – pay tribute to a starfish, a creature slightly less primitive. The starfish must represent the stars, to the simple minds of the willful seaweeds of this world.

But behold – what happens on the lower left? Here the simmering visual themes of translucence and opacity come to the fore. 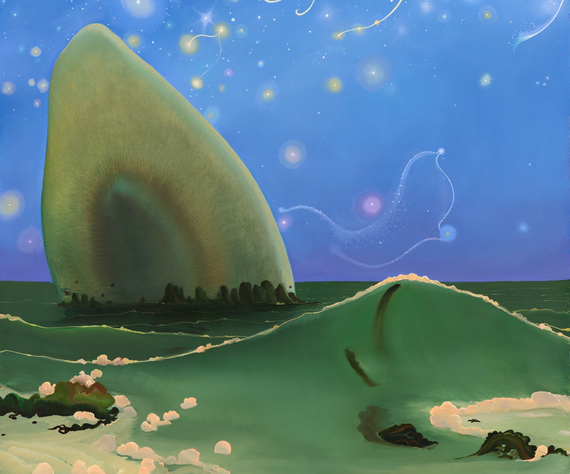 Some kind of a thing reaches its indecipherable limbs upward inside the foreground wave, and in the background, another boulder, seemingly translucent like the wave, rises up out of the sea. What is this? I have an impulse to tell you that the theme of rising repeats here, that an implied vertical motion again represents the struggle from simple materials and simple forms toward complexity, energy, and freedom. But I can’t really say that, because I have no idea what the hell is going on over here. Let us zoom back to the entire composition.

This is a very strange painting. Some of it is mysterious and inscrutable. As its sky has neighborhoods, so too do its land and sea. There are many stories taking place in Aquarius, with room for connection and disconnection, and for disagreement between viewers.

The composition is unified in its broad shape and structure, and crisp and clean in its blues and aquas and greens and yellows. For all its empty passages and quiet zones, it is a crowded composition, echoing the crowded cosmology of certain cluttered artworks from the late middle ages and the early Renaissance.

I have only seen this painting in person once, at the opening for the show in which it is currently on display. The room was packed and hot, and there were many loud voices. Aquarius, however, projected a region of solitude in front of it, a space of indefinite contemplation, quiet but for the hisses and sighs of its broad sky. It depicts an active and sentient landscape, alive and on the move. It gasps with life, and forces a gasp of life on its viewer. It invites, and rewards, sitting with it and looking for a while.

That’s a very fine thing, isn’t it? I wanted to celebrate that a bit with you today. I hope these notes on the things I saw it it help you to find your own way to claim the not-yet-named riches it offers.